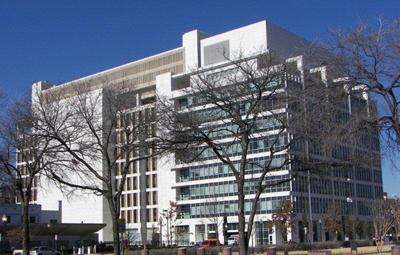 End post on the first floor of the staircase Photo courtesy Terry Jeanson , February Displayed in the center of the first floor is a lighted Pegasus which sat on top of a Mobil gas station in Casa Linda in east Dallas for fifty years. Before that, in , it was on display at the World's Fair in New York.

The original Pegasus on top of the Magnolia Building in Dallas was larger than this one. Second floor hallway. Each room on the second floor is filled with display cases and interactive, multimedia kiosks which educate visitors about the history of Dallas and Dallas County.

At the time of his commission the Dallas Courthouse he was practicing as a principal in the firm of Orlopp and Kusener of Little Rock, Arkansas. It housed four clockfaces and a 4, pound Howard bell. In February of a structural failure forced removal of the tower. The masonry is strongly textured and features the heavily arched openings characteristic of the Romanesque.

The entrances are supported on marble columns from Burnet. Eight circular turrets are dominant visual elements of the building as it now stands. At two elevations projecting pavilions rise to triangular termination lacking only the small flanking spires with which they were originally adorned. Originally each elevation featured a four foot terra cotta griffin from the Indianapolis Terra Cotta Company as adornment.

Only two remain, one in its historic position, and the other preserved in the Dallas Historical Commission's archives. The phases included an exterior restoration and interior renovations to expand and improve the Old Red Museum of Dallas County History and Culture.

In , Dallas County received a planning grant in Round II, which was followed up in Round IV in with a construction grant for the replication of the original clock tower removed early in the 20th century. In addition to the reconstructed clock tower, notable features of the project include the restoration of one of the original courtrooms and the spacious fourth floor library, as well as the grand, cast-iron staircase, reconstructed using elements of the original, in an open, four-story high space that visually dominates the historic lobby of the building.

Walls and ceilings of the large and impressive historic courtrooms have being restored in their original colors. This project was completed in The historic courthouse is located on Houston Street, between Main and Commerce streets.

This is the south facade. The Vital Statistics Unit strongly recommends that applicants ensure a verification will satisfy its intended use.

If no record of a marriage is found, the verification letter itself can be considered a "single-status letter," which some foreign countries accept as legal proof of single status.